A quick guide and recipe to making a simple yet delicious Chicken Jalfrezi.

Jalfrezi, literarily meaning 'hot-fry' has its origins in Calcutta during the period of the British Raj. Though not a traditional Indian dish, it's actually more of a cooking style used by Indian chefs in England to heat up left over roast meat and potatoes and cover up any unwanted tastes. The cooking was so enjoyed at the time that an entire new dish was born. Interestingly, a similar method with different ingredients was also found in China beforehand and the word 'jalfrezi' itself stems from a combination of Chinese, Bengali and Urdu.

Like many Indian dishes, variation in ingredients and taste is common. The spice level can range from medium-hot to very spicy and be on par with other curries like madras or vindaloo dependent on the chef's preparation. A typical jalfrezi will however contain onions, tomatoes, green chillies, garlic, ginger and bell-peppers as its main ingredients. 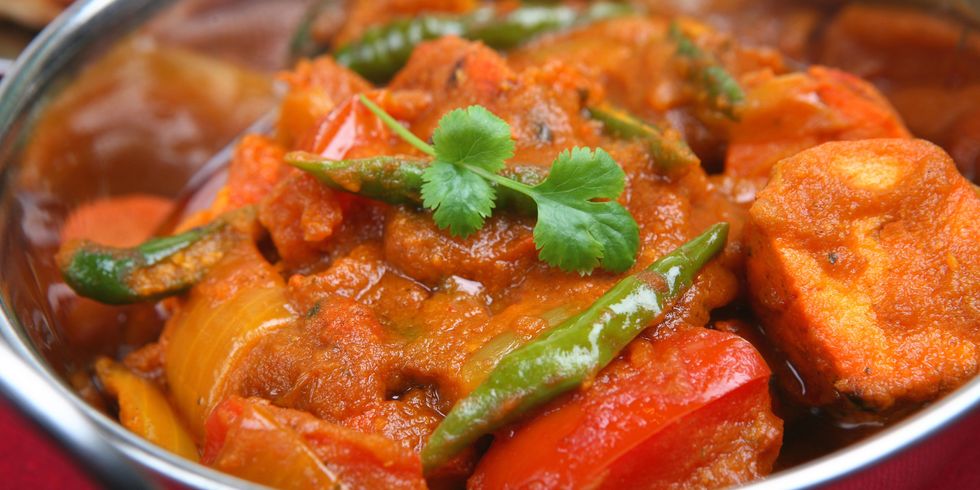 It is easy to understand why such a dish has become one of the most popular in Indian restaurants today but you might want to know how to make a jalfrezi yourself at home. First you need to know what you want to make, whether it be chicken, lamb, vegetable or prawn.

Since chicken is the most popular, here is a quick guide to making a simple yet delicious chicken jalfrezi.

Chicken jalfrezi or any dish cooked in a jalfrezi sauce/style is served best with boiled rice or naan bread. For a bit of extra kick try adding a small amount of garam masala. Be careful not to add too much though as it could easily overpower the dish. A well made jalfrezi should taste fresh and zesty, leaving your tongue tingling. If you're someone who believes the spicier the better, it would be advisable to add some extra chillies midway through cooking and to use some of the seeds in the bell-peppers as well. In addition a dash of Amchoor (dry mango powder) will provided an added piquancy. If you don't have this, lemon juice is a good alternative. Those looking for a healthier meal can substitute vegetable oil with olive oil.

The preparation method for lamb and prawn jalfrezi is near identical, though be sure to cook the lamb for at least 30 minutes. Prawns however only require around 10-15 minutes cooking time with constant stirring. For the vegetarians out there, when cooking a vegetable jalfrezi it is best to add a little turmeric, cumin and coriander before you cook the vegetables and then once again whilst cooking. You should avoid vegetables like potatoes and peas since they are quite dense and starchy. Ideal vegetables for a jalfrezi are cauliflower, broccoli, carrots and green beans but don't forget a little experimentation is never amiss.